Quite a few updates this Work in Progress Wednesday!

I finished my Tonight socks and got through to Round 6 of Sock Madness. I’m pretty happy with how they came out, although I do have to lengthen them a little in the foot to fit me properly, and make the toe more rounded as usual. They’re fully reversible which is pretty cool. 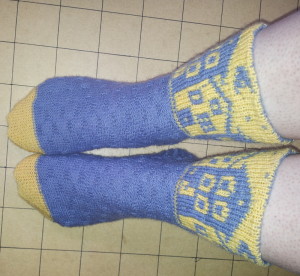 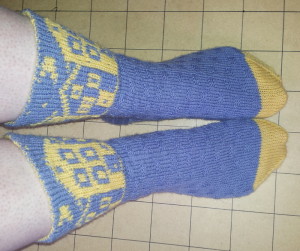 I was all prepared for Round 6. I had tv queued up to watch, yarn and needles at the ready. The pattern arrived on Sunday, Chill Thrill, and I liked the look of it. I then spent 12 hours straight just getting to the heel flap on the first sock. As pretty as the pattern is, I wasn’t enjoying knitting it and it had some errors that were putting me off. My wrists were already aching a little, so I decided to sleep, rather than stay up until they were done. Overnight, I realised that there was no point in me continuing. Not only did I have the above problems to content with, but it was another heel flap sock, and they just don’t fit me very well, plus I wasn’t that happy with my yarn choice. I decided that it would be best to drop out. Even if I got the single place on my team to get to the next round, I couldn’t guarantee being able to spend the time solidly knitting to even attempt to win the overall competition. Someone else on the team had also already finished their first sock, and would have much more of a chance in the next round too.

The sock so far was frogged, and I’m still pretty happy with my decision. 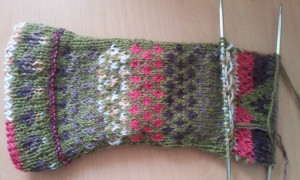 I found it difficult to decide what to knit next. I decided some summery socks were a good idea. I chose some bamboo yarn (Wendy Happy) that I previously tried to knit into a cardigan back when I first started knitting. Because of tendency to stretch and stay that way, bamboo yarn doesn’t generally work well for socks, yet is a wonderfully cool fabric perfect for summer. I thought if I knit them fairly tightly on my smallest needles (2.25mm) the lack of stretch could be overcome. I’m using the pattern Seasonal Socks and am going to use my favourite Fish Lips Kiss heel, so hopefully I’ll end up with a pair of socks I’m happy with. 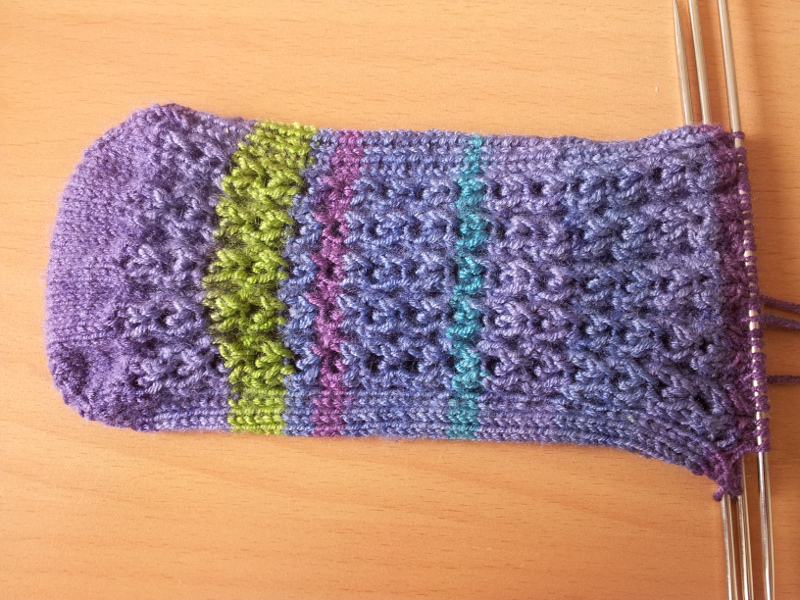 I’ve won two knitting related prizes recently. The first was a pattern from PolarBears (on Ravelry) which I won as I dyed my own yarn for Sock Madness Round 3. There wasn’t a great deal I’d knit from the selection, but I chose Playtime Colors because it looked like a fun knit and I’m sure I’ll find someone who wants to knit it. The second was a random prize from a group in Ravelry, where there is a monthly sock challenge. I happened to be one of seven lucky winners for May. I won two skeins of Lorna’s Laces Shepherd Sock and I’ve never used it before so I’m looking forward to that.

Finally, some sad news. Beshley’s Wool Shop, which I wrote about a while ago, is closing. Apparently it’s because Beshley has an opportunity she can’t pass on, but it unfortunately means she won’t be able to run the shop anymore.

It’s just under two weeks until we move house and we’ve barely started packing, so I doubt I’ll have a huge amount of knitting time for the next few weeks. However it does mean that once we’ve moved, I finally have a bit more freedom to make the house and garden look nice so hopefully I’ll be able to post a lot more crafty projects other than knitting!