This week, I finished Grandma’s Socks. I also decided that the hat I showed in WIP Wednesday last week doesn’t actually suit me so I’m not bothering to finish that.

Mainly though, I’ve been working on a new pair of socks: Mirrored Fair Isle, from my Think Outside the Sox book.

The red yarn is one I’ve been searching for since I moved back at the end of June. I finally found it among a random assortment of stuff in a bag and thought it would be perfect for this project. I’ve also been missing a set of my sock DPNs since we moved. I was about to start knitting and found them safely hidden in the middle of the ball of yarn, along with the 5th 2.25 DPN I was also missing.

The socks are turning out much more suitably sized than the Twisted Mosaic ones, so I’ll actually be able to wear them when they’re finished. They’re my first try at fair isle and it’s actually going surprisingly well, apart from one moment when I got distracted in knitting group and ended up having to rip back about 15 rows because I made a mistake. I’m onto the foot now, so hopefully I’ll at least have this first one finished by next week. 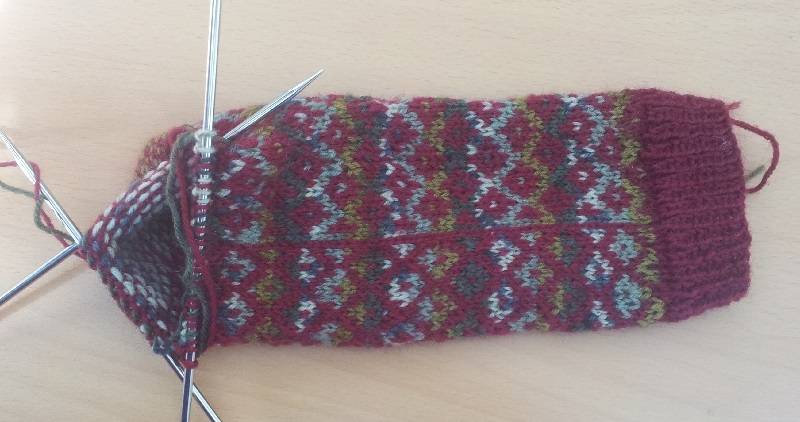 As usual, I’m using King Cole Zig Zag because I know it wears well and I have a huge stash of it.